On the first two days of September, the City of Oulu hosted an esteemed delegation as the Japanese Ambassador of Finland Kazuhiro Fujimura came for a visit. The Ambassador was accompanied by his wife and three Embassy secretaries, as they were acquainted with the local ecosystem and some of its major operatives.

The Japanese delegation started their two-day programme straight from the airport as hosted by BusinessOulu representatives at BusinessAsema. Head of Key Accounts and Investments Olli Löytynoja, Business Development Advisor Anne Ryynänen, and Senior Advisor of International Affairs Takako Uchida welcomed the guests with a morning coffee and introduction to the functions and environment of BusinessAsema.

After a general presentation, the Ambassador’s party was guided on a tour of the FabLab premises where FabLab manager Jari Uusitalo introduced the guests to the facilities of the well-equipped fabrication laboratory and the possibilities that it offers for digital fabrication according to an open innovation concept. The visitors were surprised to hear that there are in fact several such laboratories in Oulu. 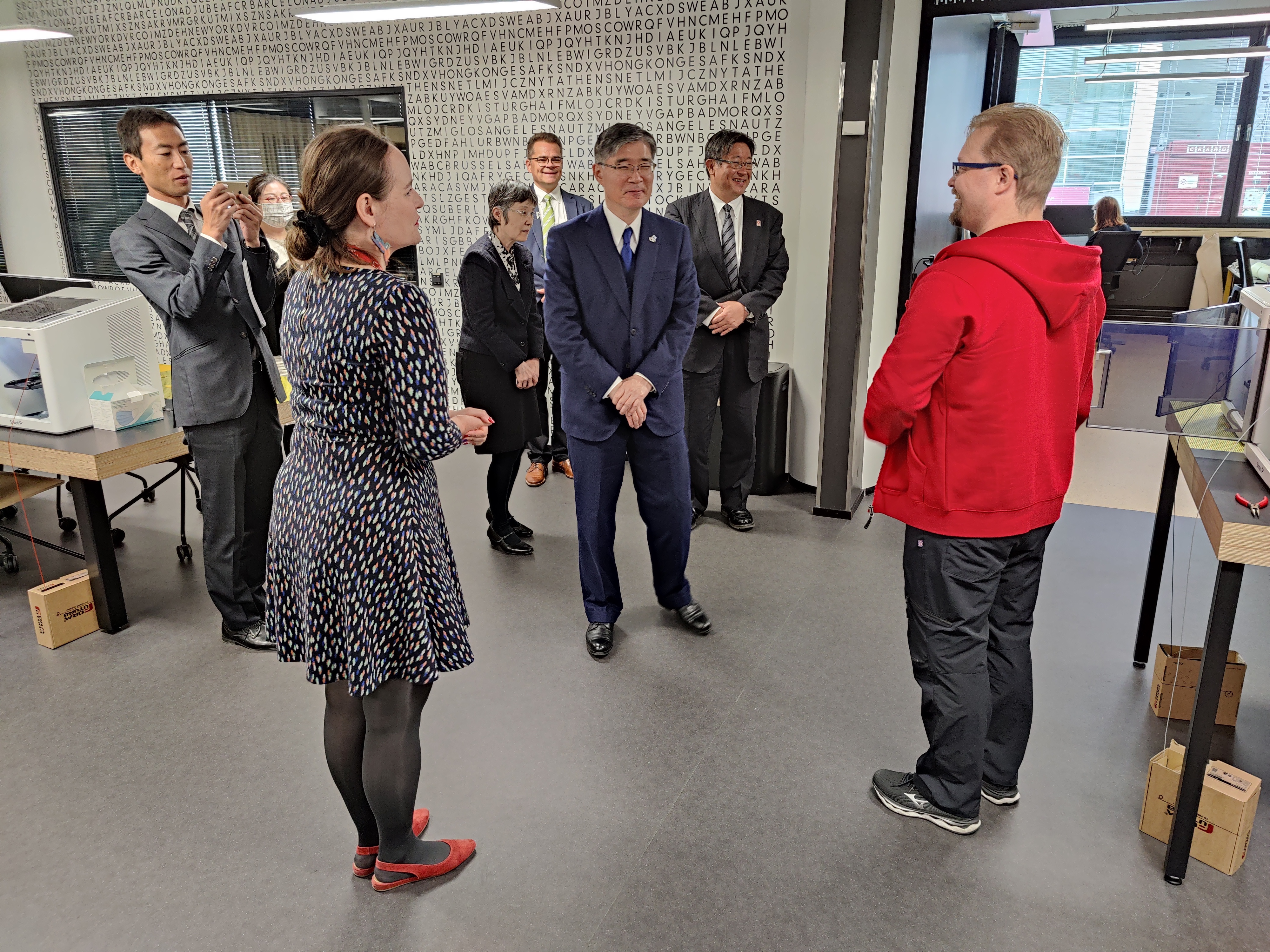 When asked what the Ambassador was particularly hoping to see during his visit to Oulu, he said:

“We hope to observe industry-academia-government collaboration and cooperation in wireless communication technology and other cutting-edge ICT technologies. We also hope to see the local activities that form the soil for such cooperation.”

Fittingly, the journey continued to Linnanmaa, where the Ambassador and his delegation visited the PrintoCent research and development Centre at VTT Technical Research Centre of Finland. The guests had an introduction to the PrintoCent operations and were given a tour of the centre, including the printed intelligence pilot factory.

“We are interested in how the University of Oulu, Oulu University of Applied Sciences, companies, the City of Oulu (BusinessOulu), and related facilities work together as organizations,” the Ambassador stated.

Before Linnanmaa, the Embassy invited the Finland-Japan Association of Oulu for lunch in Restaurant Rauhala, a beautiful historical wooden house, in order to praise the representatives of the association, including founders and current board members, for their continuous efforts of more than 35 years’ activities between Oulu/Finland and Japan.

While in Linnanmaa, the guests were then shown around Oulu University of Applied Sciences along with its Business Corner and the Oulu Game Lab, which has signed a collaboration agreement with the City of Sendai in Japan, before visiting the University of Oulu Innovation Centre. Besides the centre, the party was also introduced to the Yokohama National University branch office in Oulu.

A prestigious delegation’s visit to Oulu would not be complete without being initiated into the secrets and local expertise in wireless communications. Hence, the programme continued with an introduction to the 6G Flagship research and discussion about the global R&D situation concerning 6G, as well as the status of Finnish-Japanese cooperation around the topic. The in-depth visit was hosted by Research Director, Dr. Marja Matinmikko-Blue and Director Government Relations & Public Affairs Iina Peltonen of the 6G Flagship.

The opening day of the Ambassador’s visit ended with dinner in the company of some Japanese residents of Oulu, hosted by the Embassy of Japan.

“We are very interested in the daily lives and activities of Japanese people living in Oulu,” the Ambassador explained.

More technology and discussions on Day 2

According to Ambassador Fujimura’s wishes, also the second day’s programme of his visit involved a lot of high technology.

“I was especially attracted to Oulu because of the city's national and international reputation for high-tech innovation, which is vividly depicted in the book ‘Oulun ihmeen tekijät’,” said the Ambassador.

Naturally, the guests were then escorted to Rusko for an introduction and tour of the local Nokia site, including Nokia Flagship Over-the-air laboratory OTAVA. The Ambassador was hosted by Ecosystem Manager at Nokia & 5G Test Network Lead Olli Liinamaa, Engineer Kenichi Komatsu, and Engineer Jere Aallikko. 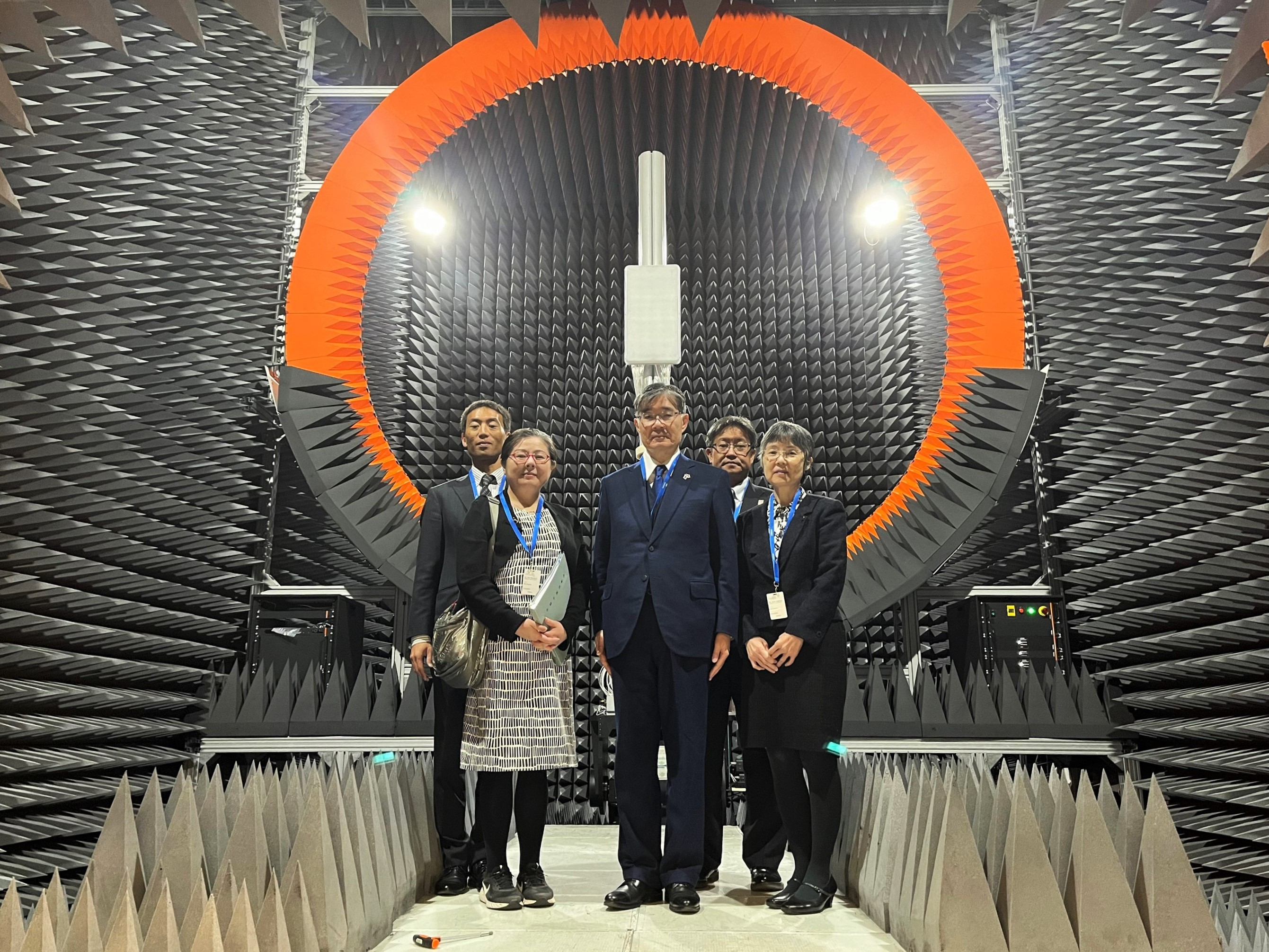 After the Nokia visit, the Ambassador was greeted at lunch by representatives of the City of Oulu, including Chair of City Executive Board of Oulu Mirja Vehkaperä, BusinessOulu Head of Key Accounts and Investments Olli Löytynoja, and Head of Public Relations and Protocol at City of Oulu Outi Rouru, along with Mill Director and Managing Director of Stora Enso Oulu Oy Juha Mäkimattila.

In the afternoon, the Ambassador and his delegation were driven to Oulu University Hospital for a tour of OuluHealth Lab given by Manager of Testing and Innovation Timo Alalääkkölä and Service Designer Teemu Kemilä, along with an introduction to the Future Hospital, which, of course, is still under construction.

The last presentation to the Ambassador was given in Japanese, as he and his entourage visited the local offices of ROHM Semiconductor from Japan for an introductory tour of the premises and discussion about this major corporation’s operations in Oulu. At ROHM, the visitors were greeted by Director Naruhiro Okamoto, who participated remotely from the German office, together with Division Manager Nobuaki Umeki, Operations Support Manager Frida Bergman, and Operations Support Expert Susumu Sekiguchi attending locally.

Ambassador Fujimura regarded his visit and all the discussions as fruitful and felt that they gave him a lot of ideas for the future. When asked what kind of cooperation he would like to see between Japanese and Finnish companies and institutions, he said:

“In 2016, a joint statement on the strategic partnership between Finland and Japan was signed by then Prime Minister Abe and President Niinistö. In May of this year, Prime Minister Sanna Marin visited Japan and at a summit meeting with Prime Minister Kishida, cooperation between the two countries in the field of science and technology was emphasized. Today, the world is in upheaval due to various issues such as security environment and global warming. In this context, I think it is very important that Japan and Finland, which share the same aspirations, cooperate with each other by leveraging each other's strengths in the latest science and technology.”

On a more specific note, there were some points of interest for the Ambassador as far as Oulu was concerned.

“I understand that the City of Oulu, BusinessOulu, the universities, and companies are working together with industry, academia, and government to build a "Radio Park”. I feel that this is a very interesting concept for the development of advanced communication technology and its implementation in society,” he envisioned. 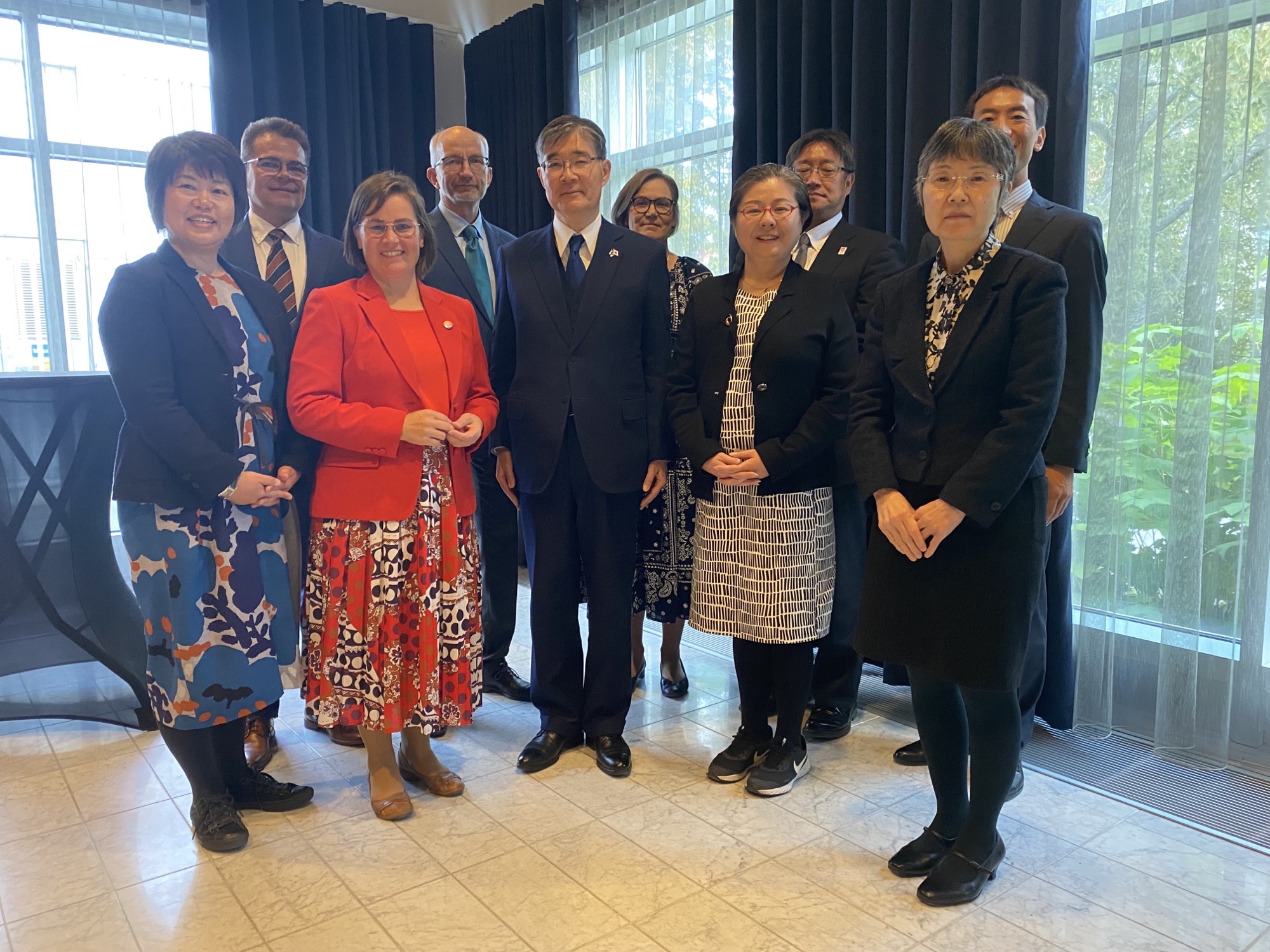 But what, then, could Oulu improve on from a Japanese perspective? Ambassador Fujimura had a clear view on this, too:

“Unfortunately, I have also heard that the name of Oulu and its value are only well-known in certain fields in Japan. To open new horizons, I think it is important to raise the profile of Oulu, which has such a wonderful environment, and to strengthen external communications and PR activities so that various industries from Japan can participate.”

The Ambassador even had some practical ideas on how to improve the international visibility of Oulu.

“Of course, the people of Oulu have already been making efforts to this goal. In addition to this, I would like to suggest that the city of Oulu use the major events scheduled for the future as opportunities to attract the attention of the world. For example, the Osaka-Kansai Expo to be held in Japan in 2025 and the Oulu European Capital of Culture in 2026 could be such opportunities,” he concluded.