I hope Arctic Airlink has come to stay

Ingress / Summary: (A traveller from childhood, always a traveller. She just can’t stop travelling. With Arctic Airlink her hobby has been made much easier. Meet Lena Jonsson, a psychiatric case manager working as a nurse with Tromsø University hospital.) 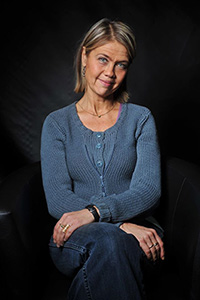 Lena Jonsson works as a part time nurse in the psychiatric ward at the University Hospital in Tromsø. She travels to Tromsø once a month and works part time in Zurich, Switzerland for the rest of the month.

A deep look into her blue eyes, one cannot miss the adventurous and outgoing spirit. Her eyes sparkle when asked why she has to travel outside Sweden to work.

“I have always liked travelling since I was little. Mine was a travelling family. My grandfather worked with the railway and we always had free tickets to travel from Piteå (northern Sweden) to Småland (southern Sweden). And that is how my mother met my father. He comes from Småland.”
Lena has been working in Tromsø since the autumn of 2011. And, during her first year, she commuted between the two cities by train. The journey by train was never rosy. It always kept her anxious.

“There were days when the timetables could change due to bad weather especially in the winter. The connections were very bad!” She says, adding, “Tromsø has no railway. I boarded a train from Luleå to Narvik. Then from Narvik, I took a bus to Tromsø. There goes only one train a day on this route if you want to make it in one day from Luleå to Tromsö. Otherwise, you have to stay over night in Narvik and continue by bus next morning. That costs you money and time. I don't have that time or that money.”

Also, with the continuous unexpected delays, she stood a risk of missing to catch her bus on time. There is a limited time between the time the train arrives at Narvik and when the bus leaves Narvik for Tromsø.

“I hate being late. I am very strict with time keeping. I was always nervous about the time factor. I did not want to miss the bus and be late for work.” She says. “Being kept on my toes all the time was not worth it!”

“It simply became unbearable to continue travelling by train. They forced me to start to fly!” Lena says.

There were no so many alternatives to choose from with the flying option at that time. Her normal flying day to Tromsø begun at 6.00 am. She flew with SAS from Luleå to Arlanda-Stockholm, thereafter to Oslo. From Oslo, the journey ended in Tromsø between 3.00 and 7.00pm.
The introduction of Arctic Airlink has brightened her days. She has been flying with us since the maiden flight.

When talking about the flight, she warms up with a lot of enthusiasm and says, “It is a very good flight. I was so happy when it came. It was a big thing for me.”

According to Lena, it solved a lot of problems for her especially the long hours of travelling. After her first flight with Arctic Airlink, she could feel a very big difference compared to the train and the journey through Stockholm and Oslo, for her journey had been cut short 9 hours. She was now travelling to Tromsø within one hour instead of the 10-12 hours she had gotten used to.

“I absolutely recommend this airline! It is the easiest way one can travel between Luleå and Tromsø. It is cheaper and faster. With the flight, I basically have to sit down and stand up again. It is so fast!” Lena says. She has always admired Tromsø city’s beauty. It is an adventure for her each time she travels there. She says the city is a very good tourist destination because of its beauty and people.

“I always stay at City Living hotel while in Tromsø and they are so service minded there.” She says.

Lena enjoys travelling also because she gets to meet different people from all walks of life. She likes getting to know people and their cultures. She says it is exciting in Tromsø city for it has visitors all year round from all over the world. Most of them she has talked with say they are attracted by the northern lights and the nature. They say it is fascinating and exotic to them.

“It is so beautiful to look out of the window and see the untouched nature in Tromsø. There are places one cannot reach on ground because of their location but can see from the flight.” Lena says and adds that Arctic Airlink makes the visibility of those places possible.

She says the flight line is an enormous step forward for the region especially in regards to tourism, infrastructure and employment.

“I always meet other Swedish people that commute to go work in Norway. They mostly need people to work in Tromsø and now with the flight, it is much easier to reach.” Lena says and that the flight will also improve relations and collaboration between the universities (Luleå and Tromsø) because they can easily cooperate and exchange staff if they want to. She adds the flight is important for the University Hospital in Tromsø as well.

"I hope it has come to stay.” She says beaming wishfully.