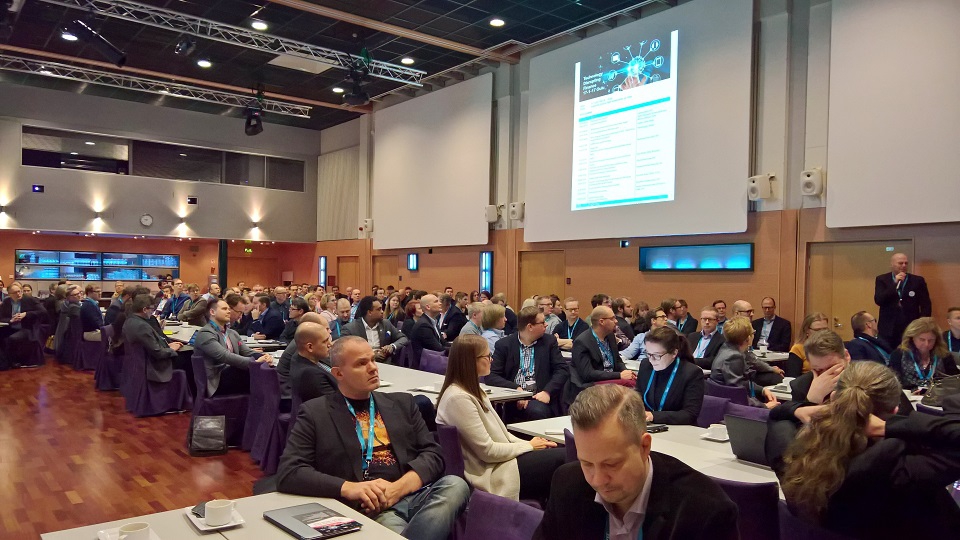 
Financial technology, FinTech for short, is the great influencer of the financial disruption. Traditional finance is under great pressure for change due to changing consumer habits. Finland was amongst the pioneers of the previous bank and insurance disruption in the early 2000s with Europe’s first online banking services. While the new disruption has already begun, Oulu aims for a sprint to the top.

Technology Disrupting Finance seminar held in Oulu, Finland, stirred conversation about the future of FinTech and how Oulu’s Fintech and ICT know-how could be fully leveraged. The seminar, held at Hotel Lasaretti in Oulu, Finland, on January 17, gathered a full house of finance influencers, startups and interested parties.

Keynote speakers at the event included David M. Brear, voted one of banking, finance and insurance’s top influencers, and Barrabes’ CEO Luis Martin, who recently established a branch in Oulu. Other speakers included blockchain, 5G and Fintech experts from companies such as Nokia and Tieto, and researchers from universities.

“Oulu has world-class high technology know-how, a unique ICT ecosystem, focused people and an open attitude. We can find nothing comparable to the technology in Oulu,Finland, from Spain. In Oulu you can have a roadmap, not just a product, and operate within a real innovation ecosystem”, Martin said in his keynote.

“Oulu would make a great hub for Fintech, as we have a vast pool of ICT know-how and two major Scandinavian banks’ R&D centers in Oulu. After Nokia’s change of direction and Microsoft’s evacuation, the puzzle pieces are falling into new places and we have an open mind for the future”, Ailisto says.

Fintech is the word finance due to digitalization and regulation changes. Internet and digitalization have already disrupted, for example, media and tourism, and will most likely transform others, e.g. transport and health sectors. Fintech is already the second major disruption in banking and insurance. The previous disruption was unique in that it did not give birth to new companies, but rather maintained established ones by self-renewing their services, e.g. online banking.
David M. Brear thinks digitalization is not the be-all and end-all solution in finance.

“The hardest thing for banks is to innovate around the business model. Established players are too afraid to let go of an existing business model until a new one is already stable and functional. It is one thing to digitalize existing, born analog services and another to develop services born digital.”

“This is the challenge facing finance. Online banking is not a sufficient disruption, it is only a transition of analog services into digital services. Established organizations need to innovate new, born digital services. Startups outside banking’s business are already doing it,” Brear says.

Fintech represents a different disruption. The EU is opening finance to competition with new regulations, and it boasts a significant number of startups, which have gathered billions in investments. The big players of the business however will not just turn over and die, thus sparking a strong will to transform.

Oulun Innovation Alliance (OIA) is the alliance of The City of Oulu, the University of Oulu, Oulu University of Applied Sciences, the Oulu Region Joint Authority of Education, VTT Technical Research Center of Finland, Oulu University Hospital, Natural Resources Institute Finland ja Technopolis Plc., that takes Oulu to the top in five focus areas. It aims to create an innovation ecosystem in Oulu that boosts top know-how enterprises to start, develop and internationalize.

ICT & Digitalization is one of OIA’s five ecosystems created around the five focus areas. ICT and digitalization’s significance is ever growing and ICT is Oulu region’s most significant private employer. One of the ecosystem’s goals is to make Oulu the Fintech Hub of Northern Europe. This is achieved by utilizing Oulu’s ICT ecosystem’s know-how together with the region’s companies as well as research and educational organizations.

David M. Brear is the co-founder and CEO of 11:FS. He has been voted one of banking, Insurance and Fintech’s top influencers.

Luis Martin is the CEO of Barrabes Consulting, recently established in Oulu.

Markus Hautala is the Head of Business Accelerator at Tieto and a Blockchain expert.

Ilkka Lähteenmäki is an independent researcher at the University of Oulu.

Mikko Riikkinen is a researcher at the University of Tampere.

Seppo Yrjölä is a Principal Innovator at Nokia.