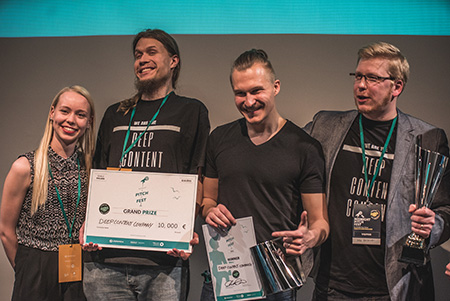 OULU, FINLAND - 11th June 2015 – The world’s northernmost start-up festival Midnight Pitch Fest pitted almost 50 companies to compete against each other to see who has the best business idea and pitch. The high-level competition culminated in tonight’s final, where the grand prize was awarded to Deep Content Company, which has developed video search service.

Organized in Oulu for the third time, the Midnight Pitch Fest earned both national and international attention. The event gathered 500 participants and nearly 100 applicants. Out of these, 48 companies were selected to compete for the grand prize of 10 000 euros, as well as investor and media attention with their business ideas and pitching skills. The companies competed in four different categories: Apps & Services, Tech & Services, Games & Entertainment and Health & Sport. Deep Content Company convinced the competition jury with a fresh and innovative concept.

- The business of the winning startup was extremely well managed and the concept was proven in the market. The model is scalable and the potential of users is massive, said the chairman of the Midnight pitch fest jury Christian Sundell.

In addition to the pitching competition, the Midnight Pitch Festival featured a custom built 3D-Cave to showcase game, architecture and urban planning innovations. Visitors could enter the cave and admire the virtual worlds from over 20 m² of digital surface. The 3D-Cave was built by the City of Oulu and is available throughout the event. Applications from OAMK’s LabLand program and several game demos from Oulu based companies will be showcased on Friday.

Printocent Innofest, which is held as part of the Midnight Pitch Fest, gathered over 150 participants to innovate future printed intelligence applications. The Innofest has a pitching competition of its own, and the winner of the best printed intelligence innovation competition will be announced on Friday 12th of June.
Additionally, the Hilla Growth Mill event on Friday showcases four Finnish companies changing their industries with printed intelligence solutions – for example in healthcare and lighting. The Hilla program brings together both researchers as well as new and established companies for business collaboration. HILLA Growth Mill session are arranged to initiate new joint developments between companies.